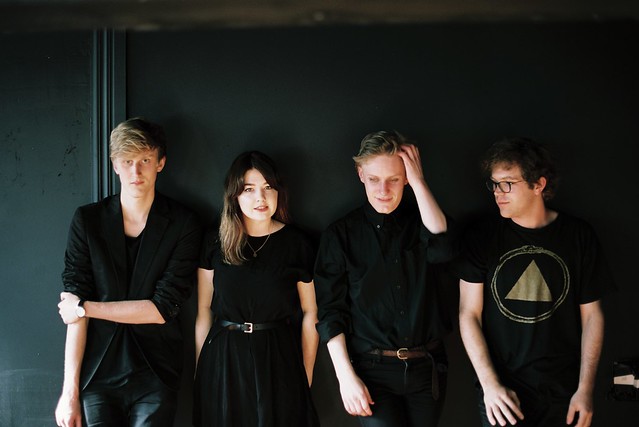 With their name etched in cursive, hovering in the stage background in bright lights, Yumi Zouma played 14 fun, breezy songs from their new album and two previous EPs.

Their first full-length album, Yoncalla, came out in late May and I’ve had it on heavy listening rotation leading up to the show.

Aside from Christie on lead vocals, the band consists of Sam Perry, Charlie Ryder and Josh Burgess. Charlie and Josh formed the band by recording a song virtually and sending the demo to Cascine. Cascine cried for more and signed them. They continued to collaborate from a distance, as Josh lives in New York City and Charlie lives in Paris. Christie, living in Christchurch, was not the original lead singer, but joined in time to record the new material.

The hardest part of doing this review, I couldn’t pick which songs to highlight. They are are good. All catchy and dance inducing.

My initial favorite, “Barricade (Matter of Fact)” was supplanted by “Text From Sweden” then “Short Truth”. Now I’m partial to “Haji Alawi”, with a melody that flits back and forth, and “Yesterday”, an upbeat song that never gives you a chance to keep still.

This tour marks the first time Yumi Zouma has played in DC. They were so excited, they even tried to sing the refrain from “I’m Just a Bill” from Schoolhouse Rock!, because maybe that’s just what Kiwis think of on the topic of our nation’s capitol. In their favor, that’s what I thought of when I was a kid.

DC9 was very full in anticipation of the show. From up close, Christie’s eyes scanned the room, seeming to settle on each individual person, almost as if we each had our private show.

The mood of the band and the crowd was the perfect continuation of the sunny, summer day we had just enjoyed. You could tell many people knew Yumi Zouma’s songs, while others were still new to the music, but found themselves completely engrossed and happy with the choice to check them out.

All and all, I look forward to the next time they visit DC!
[youtube https://www.youtube.com/watch?v=7PlKQm1jons]