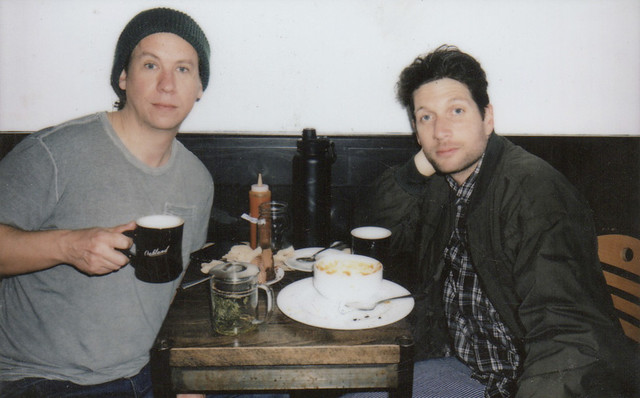 No Age (Photo by Danielle Thompson)

Noise rock duo NO Age released Snares Like a Haircut, their fifth studio album, via Drag City in January. Guitarist Randy Randall and drummer/vocalist Dean Allen Spunt are now on tour from Los Angeles with a stop at DC9 on Friday, May 4.

Critics love the new album! “Fifth album, Snares Like A Haircut (sorry, no real band would call an album Snares Like A Haircut?) picks up where this preposterous, brilliant and presumably imaginary duo left off with 2013’s An Object: fuzzy Sonic Youth stompers bumping against drifting sound-collages and blurring in the middle, like an audio venn diagram,” said Marc Burrows in a review for Drowned in Sound.

Watch the official music video for “Send Me” by No Age on YouTube:

In a January interview, Michael Tedder of Steregum asked Dean Spunt if No Age operate like DC’s own Fugazi once did:

STEREOGUM: I remember reading somewhere that Fugazi never wrote setlists, they just had hand gestures to indicate what to do. Are you guys the same way?

SPUNT: No. God no. I mean we have a setlist, mainly because it’s two of us and we’re triggering samples and they’re all numbered. We don’t play to a click-track or anything like that. Randy has expressed to me a couple times that it helps when we have a set that we play the same. Towards the end, we can throw a song in the middle somewhere that changes, or the last couple songs usually we just call out, but for the bulk of the set, he definitely likes it to be something we’ve continued doing. And it is cool because when you keep playing the same set, you find a little room to extend parts or to improv in certain areas. We ain’t no Fugazi.